Few aircraft can claim to be both elegant and a real workhorse. We created 787 Immersion for the QualityWings 787 with this elegance in mind. From draping the iconic wing flex in condensation to rendering immersive volumetric lighting, you're going to love what you see!

We have been working tirelessly in order to bring about one of the most beautiful Immersion package yet. We believe we have done an amazing job at recreating each and every effect with every little quirk the Boeing 787 presents. We are very proud of our product and we are confident that you will love it too!

Just like any other Immersion package, you can expect the utmost quality and realism from us. We make sure that each and every effect is displayed at the right time and in the right conditions. We pride ourselves in our ability to make each Immersion package as real as it gets!

Requires at least one of the following aircraft

Respect for performance is dear to us. Several hours of testing with some of the big names in the community went into making sure our product has little to no impact on performance. We think we have reached the perfect balance between incredible effects, great frame rates and an extremely low memory footprint.

The Boeing 787 wings are nothing short of impressive. Never have we seen so much wing flex in a wing and recreating wing condensation in-sim was quite the challenge. We were able to create wing condensation that is balanced yet ultra-realistic. Likewise, condensation on the 787 wings will respect the wing dimensions and extend from leading to the trailing edge, from root to tip, where condensation is to be expected.

Furthermore, our wing condensation effect will show several stages depending on the conditions. Mark our words, nothing beats a humid departure from Manchester, the show is grandiose!

Engine condensation with 787 Immersion is unique and stunning! The effect is also equipped with a varying degree of intensity according to numerous factors. Hence, whether only little thrust or full thrust is applied, the effect will display as you would expect. Taking off from Delhi on a hot and humid afternoon will be grandiose from the window seat as these two big turbines get filled with condensation!

The Trent 1000 and GEnx that equip the Boeing 787 are two powerful turbines that always leave their mark in wet conditions! Our jet wash effect not only looks powerful, it is imposing and feels as such! You, as a pilot-in-command, will feel the thrust in your hands as you push the throttle forward and see the action-reaction behind the aircraft!

Contrails have always been a matter of contention in Flight Simulator X and Prepar3D. Lots of people have attempted to fix them, but never achieved the level of realism pilots expected from them. 787 Immersion comes with majestic three-dimensional contrails. We have developed contrails from the ground up that doesn't just look right, they feel right! Moreover to beautiful looking contrails are contrails that are regulated by weather variables!

New touchdown effect for your hard landings, new engine start-up smoke under cold conditions, new brake dust effect when retracting the landing gear, under rain conditions, water droplets falling off the wing for more realistic walk-arounds! Water vortex from the ground into the engine (that one is amazing!), and upon rotation, water vapor vortices under each wingtip.

Effects will not show if all engines are shut down.
The technique used to display effects around the aircraft depends on the airplane's smoke system which does not work when all engines are off. This is a Simulator limitation.

Effects are not visible during instant replay.
Flight Simulator X and Prepar3D's replay system is very limited and does not allow the replay of advanced effects systems. A great solution in Flight Simulator X is to use FSRecorder with the smoke replay option turned off. 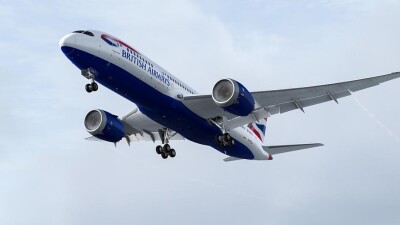 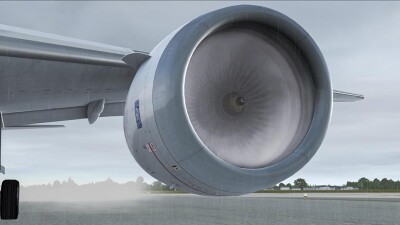 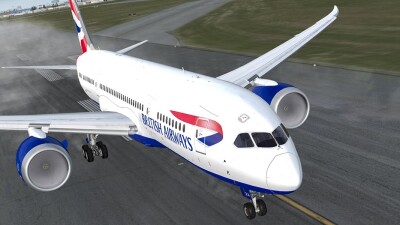 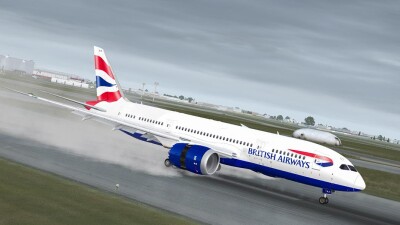 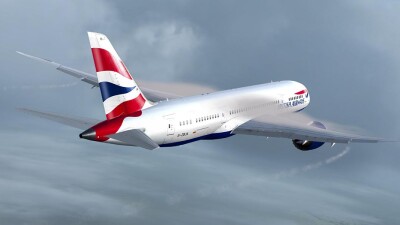 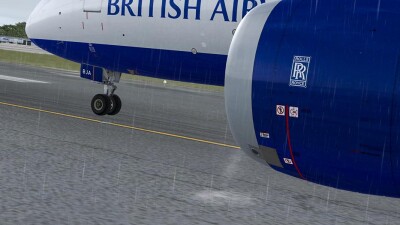 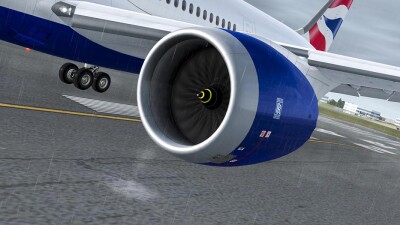